The medieval name of Kőkút-Salföld suggests that one of the basic conditions of life, water, was given not only physiological but also symbolic significance by the former founders of the settlement. The fountain, as a structure for ‘taming’ water, was a priority in the Middle Ages, as it provided an opportunity to store soil or spring water of the right quality and, as a reference point in the fabric of the settlement, also functioned as a scene of community life. The symbolism of the wells played a particularly important role in medieval monastic architecture. The spatial composition of the Pauline monastery in Salföld, like that of several other Pauline monasteries, is organized around a well that can still be seen today. The monks could very rarely leave the monastery building, so a water supply had to be provided within the walls as well. However, in addition to practical considerations, various wonderful stories, usually associated with saints, have also highlighted the role of this edifice, as evidenced by the fact that most medieval pilgrimage sites are connected to sacred wells. Some of the stories can be linked to the Turkish wars. Monks fleeing the destructive armies often hid the treasures and relics of the monastery deep in the wells, and their later discovery gave them wings of legends about the wells full of treasures. In line with the typical spatial organization of contemporary European monastery architecture, the well that also serves the refectory is located in the center of the inner, enclosed garden of the Salföld monastery. The structure, which can also be considered a life-threatening source, connects the monks' everyday spaces with the Sky as a vertical axis. As a transitional space between depth and height, the environment of the well provides a place for spiritual renewal. 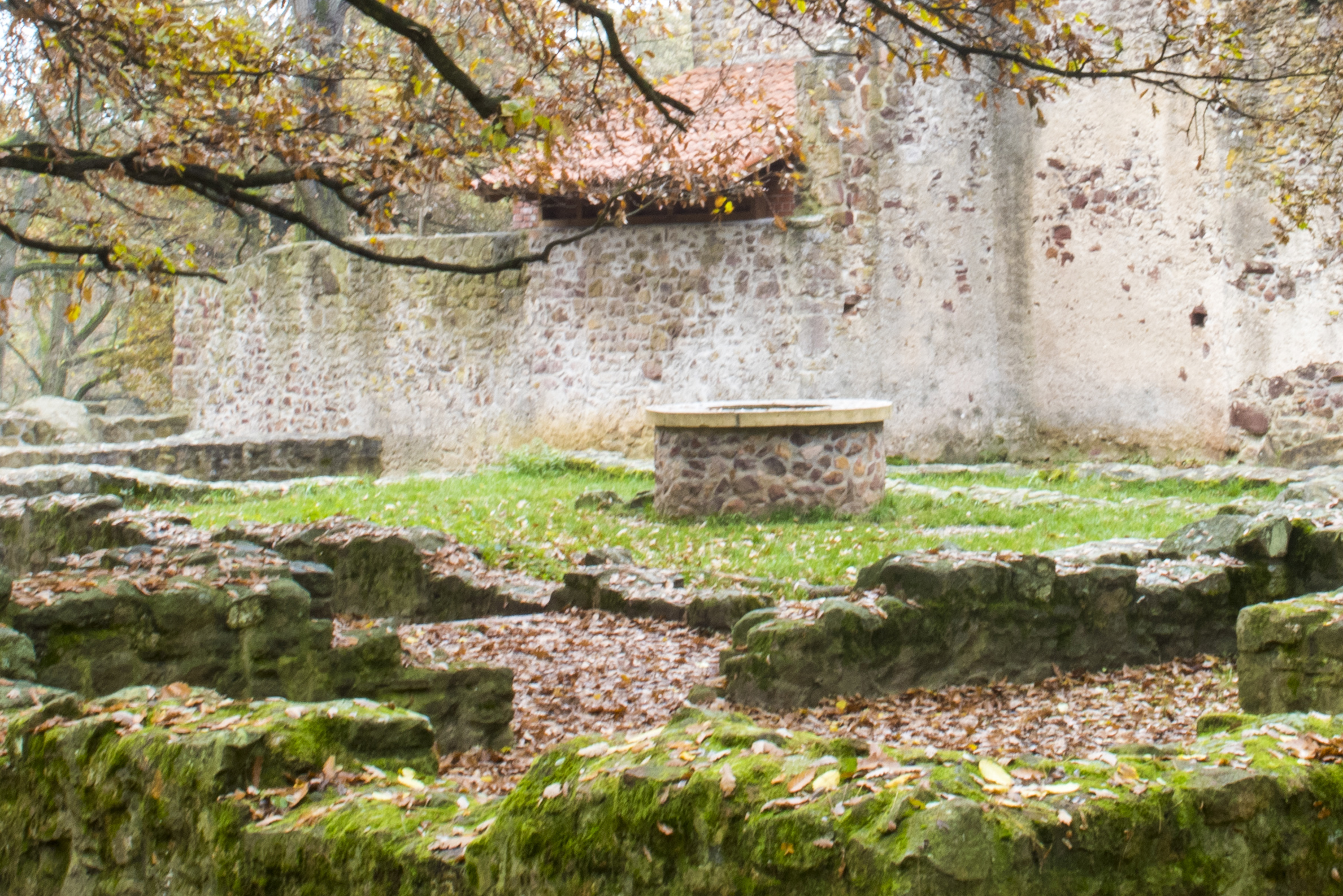 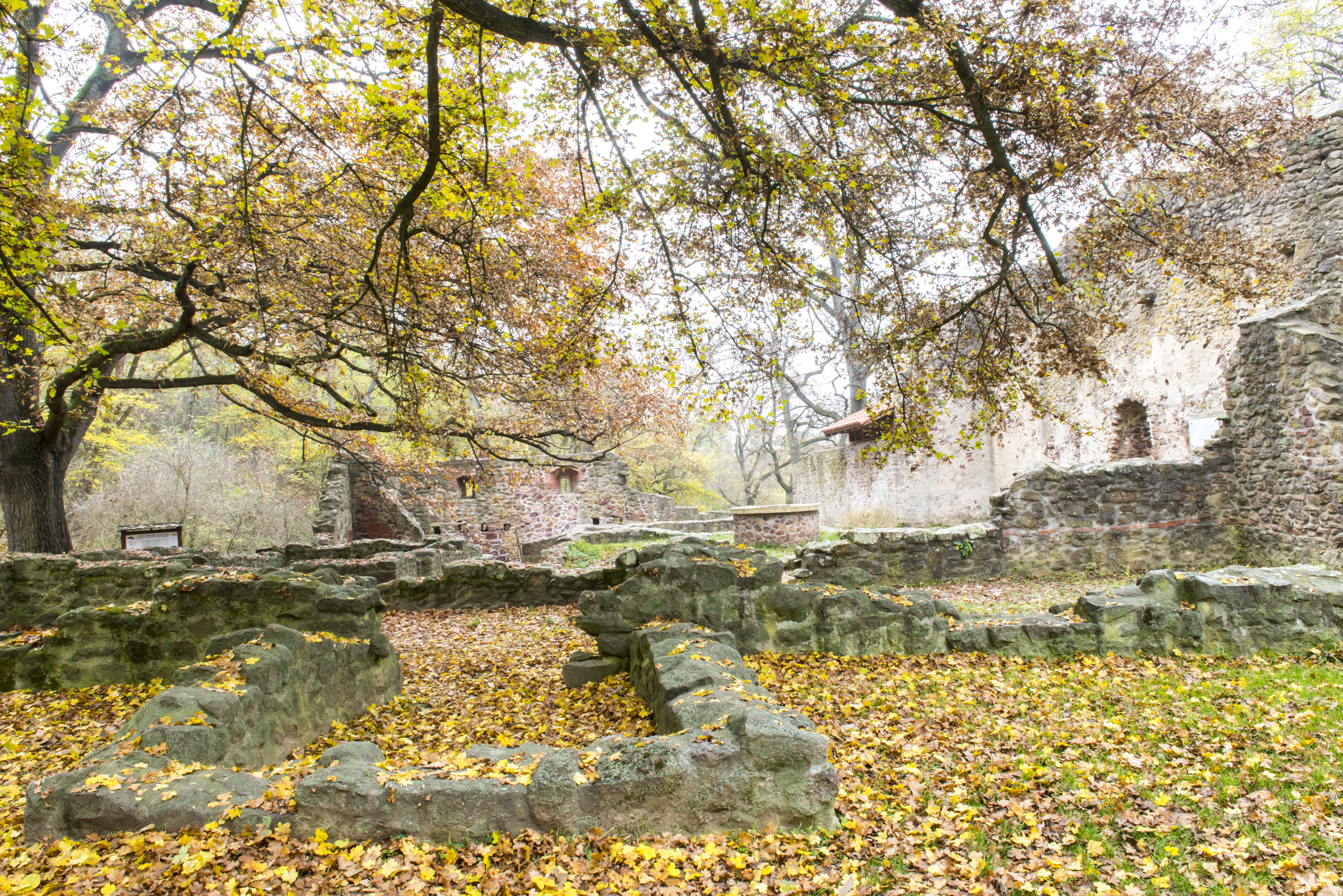 The Cistern of St. Helena is an underground natural cave in Jerusalem. It was discovered by Helena, mother of Emperor Constantine the Great. She - during her pilgrimage - found, among other things, the cross of Jesus, said to be original. The cistern is below the Coptic Church of St. Helena, which was later built, but also in the immediate vicinity of the Church of the Holy Sepulcher founded by Helena, too.

The video work is an excerpt from the photo film “From Sea to River to Sea”. Lenke Szilágyi - photographs, Csaba Hajnóczy - sound recordings, sound design. In a recording taken in 2017, a Coptic monk sings in the cistern, the natural acoustics of the place are well heard.

All ancient cultures regarded living water, especially the springs from the earth, as sacraments, and if possible developed sacral spaces in their vicinity, or highlighted them from everyday spaces with sacred architecture. Vivid examples of the latter are the stepwells (‘vaav’ in the local language) built continuously in India from the 11th to the 19th century, of which the province of Gujarat, including the capital of Anmedabad and its environs, is outstandingly rich in this respect. The broad-bedded Sabarmati River, which bisects the city, shows the image of a dry field for most of the year, and is only filled with water for a few months after the monsoon. This climate has made it essential to provide water for life in other ways throughout the year. Therefore, the construction of staircases leading to underground springs began, which served both as a place to obtain water and as a space for social as well as ritual events due to its climate, which is 5-6 degrees cooler than the surface temperature. These often 5-6 storey deep wells – as everywhere in the world –, were visited by women for water, and traditionally these wells were tied to women, and in Gujarat, the patrons of most wells are female. And although the original function of these wells is more social, well-adapted to the spirit of the place, in most of them later shrines were built dedicated to various gods, which in most cases give their main function today to the spectacular buildings erected around the now dried-up springs. The female symbolism of the stepwells is a beautiful distant parallel to the heritage of the Kőkút-Salföld monastery, which bears the sanctity of water and through it the veneration of Mary Magdalene.

The author of this text was able to personally experience the fascinating space experience of one of Gujarat’s wells, which also evoked musical parallels such as repetitive music. The Rudabai Ni Vaav is almost unnoticeable at street level. However, when we reach its entrance, an unprecedented spatial experience unfolds that Europeans cannot know. The earth literally opens up through a richly decorated strictly rhythmic order of columns and arcades. As we walk down the wide flight of stairs, each level has the same architectural order, so who is descending is constantly surrounded by the architecture of a magical repetitive music, but with the surplus that as descending, the order of the previous higher levels gradually adds to the pulsating harmony of sight. This is achieved architecturally by placing the building itself in a long spacious shaft, meaning that the columns and arcades are open all the way to the sky, so that on each floor the viewer sees more and more “voices'' above and surrounding him.

Jacob’s well is traced back to biblical times in Jewish, Christian, Samaritan, and Muslim traditions alike. The well is not specifically mentioned in the Old Testament, but biblical scholars claim that the place where Jacob erected an altar is the same as where the well built in the rock is. Over the millennia, many churches were built on it and destroyed. It is located in the city of Nablus, in the Israeli-occupied Palestinian Territories. The Greek Orthodox Patriarchate built the Church and Monastery of St. Photini in 1893, in which it is now to be found.

The video work is an excerpt from the photo film “From Sea to the River to the Sea”. Lenke Szilágyi - photographs, Csaba Hajnóczy - sound recordings, sound design.